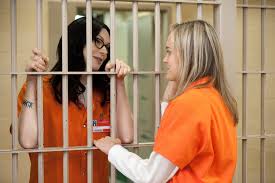 About Orange is the New Black‘s erasure of Piper’s bisexuality Lindsay King-Miller writes: “It’s as though this show (and really, almost all fiction) exists in a parallel universe where everything is the same except that the word “bisexual” was never invented. … the bi erasure in Orange Is the New Black doesn’t seem to come from individual characters so much as it emerges from the fabric of the show itself, particularly since the characters on the show who erase or disrespect Piper’s orientation are never portrayed as wrong or flawed for doing so. … Contrast this, for example, with the portrayal of Laverne Cox’s Sophia, a trans woman. It would be absurd to tell a story about a trans woman that features no discrimination, and Orange doesn’t try. But the show does offer Sophia ample opportunity to respond to transphobic policies and comments, to speak out against the way the system and people within it attempt to dehumanize her, to tell her own story in her own words. Piper, on the other hand, almost never gets to correct anyone for projecting binary assumptions onto her.”